What is Fantasy Manga - MANGAME

What is Fantasy Manga? The modern literary, cinematic, animated world of Japan, China, Korea cannot be imagined without such a widely known phenomenon as Fantasy Manga. In Japan people of all ages read manga. Numerous anime and comics, cartoons are made on the basis of manga. A huge variety of genres: mystery, fantasy, isekai, drama, romance, detective, horror, comedy and others find their reader. It has become popular all over the world.

The genre has a long backstory, beginning with drawings by a Buddhist monk depicting people as animals. He drew four scrolls telling a story to be read from right to left, like a manga. The largest scroll about the life of the Japanese was 11 meters long. The scrolls are still preserved in a museum in Tokyo.

Then pictures with captions on simple subjects and engravings with images of monsters, sumo wrestlers, geisha became popular. Then such pictures began to decorate stories. But all the same modern view of the genre acquired in the 50 years against the backdrop of economic development, printing industry. This gave artists an opportunity to find a new embodiment of their imaginations. And to find new styles and sketches. Also, the authors come up with entertaining stories.

Many believe that the development of this art form was influenced by the American comics that flooded into the Japanese market after the occupation of Japan in 1945-1952. Particularly influential were the animated films of Disney Studios.

But the manga retained their characteristic specificity, their national traits. And the first and most important is the black and white palette. This goes back to the post-war years, when few could afford to print color drawings on good paper, not to mention ordinary Japanese, who were only able to buy cheap editions. Even now, however, many people prefer the black and white version, although there is already a fairly extensive supply of color manga on the market.

The work is read like the rest of Japanese literature, from right to left. The second interesting thing is that manga are usually the work of one author, the “mangaka”. He does the plot, the sketches, the retouching, the background and everything else. These days, though, we’re seeing more of a team of author and artist.

Typically, a manga is a whole series that is broken up into volumes and chapters that can take years to print. This allows the authors to go with their imagination, to introduce new characters, to deepen and expand the plot, which is sure to keep the reader in suspense. Everyone wants to know what will happen next. On the other hand, the reader gets angry when there is a delay in printing the chapters. So the manga world is huge and full of interesting and entertaining storylines.

A special niche in this genre is fantasy manga. Readers are attracted to amazing stories, interesting characters, acting in an invented reality. The action can take place both in our world and in another parallel, fantasy world, on other planets. Life there goes by its own laws and rules.

Characters and heroes may be various mythological gods and beasts, demons and monsters, dragons and other creatures.

One of the best manga in the fantasy world is the Beastars manga. It’s a detective story with all the trappings it should have. There’s murder, police, investigation, suspects. But it all takes place in a society of beasts. This animal world is shown as a human world, filled with hopes, romantic relationships, anxieties and worries. Animals of different species, both herbivores and predators, study together in an unusual school. The protagonist of the manga is the gray wolf Legosi. Legosi is a shy and timid student.  Despite his formidable appearance, he is insecure, clumsy in various situations and tries not to draw attention to himself. He also became the main suspect. I highly recommend reading this entertaining and, as in every self-respecting detective story, tangled.  And the black and white drawings are amazing clarity and flight of fancy artist.

Example of a magical world is revealed in the Book Eater manga or The Book Eating Magician. The protagonist Theodore Miller is studying at the Magic Academy to become a mage. He studied and passed the exams in all theoretical subjects perfectly, but he couldn’t pass the practice. He’s been retaking it for two years now, but all to no avail.  He chased away thoughts that he had no magic, that he had no magical flair. Only his teacher, the professor, believed in him; he was the one who prolonged his studies, hoping to awaken his magic. One day, while in the library he heard a voice coming from the palm of his hand, demanding to be fed.

A small creature appeared in his palm, announcing that it was hungry and demanding food in the form of books. It was a grimoire, which quickly swallowed 3 books on magic.  After that Theodore realized that all the contents of the books had settled in his head. And he would finally be able to use magic in practice, which he proved to himself by summoning lightning.  What he hadn’t been able to do in five years, he had done in one evening. Magic is magic and all of Theodore’s adventures are ahead of him.

Valiant heroes go in search of adventure. But on their way there are many insidious enemies who want to break travelers.  The main characters are faced with various tests and events that involve supernatural creatures.

Plunderer fantasy manga about the digital world. The main character Hina lives in a magical world of numbers. Every person from birth had to wear a meter, and a digital marker on their body… People with smaller numbers are subordinate to people with larger numbers. That is, a person’s place is determined by his number. So everyone tries to increase it. But the counter can also go down. And if it goes to zero, you go to the Abyss. Hina’s mother died and went to the Abyss. Her last request to Hina was to find the legendary warrior ace Red Baron. Hina walks the world in search of the warrior. She is meeting both friends and enemies along the way, trying not to reset her meter. 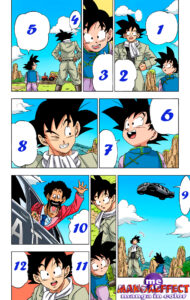